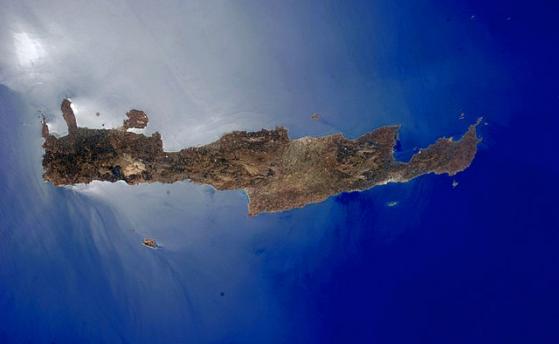 Crete, Land of Daidalos and Ikaros.
Of Minoan vases and famous frescoes.
Shinning and starlit, with its black baggy breeches and fringed kerchiefs.
Romantic Crete, with its sea, rocks and gleaming plateaus.
Crete, land of full-bodied wine and pungent tsipouro.
Sleepless Crete, land of endless feats under star-studded skies.
Crete, scented with wild fennel and fresh basil.
Dizzying Crete, of the warlike dances.
Crete, home of El Greco, Kornaros, Kazantzakis and Prevelakis.
Crete, whose door is always wide open to both East and West.
The dream of Crete, where a person might soar in flight.

The island, the largest in Greece, separates the Aegean from the Libyan sea, marks the boundary between Europe and Africa. Majestic mountains, Priorities, Dirty. Its plateaus are split by deep gorges and end up in fertile valleys.
The scenery is constantly changing. In one place harsh and barren, in another wooded and gentle.
Its villages smothered in greenery. Olive trees, orange groves, vineyards, early vegetable market gardens.
Old stone farmhouses, monasteries and villages perched on mountain ridges, castles and chapels forgotten on steep slopes. Shores lined with forbidding rocks, often inaccessible, but also lots of endless sandy or pebbly beaches. Crete is also renowned for its flora and fauna. Its massifs are home to the Cretan wild goat, locally known as kri-kri, a symbol of the free spirit of Cretans.

The main cities-ports on Crete, Hania, Rethymo, Iraklio, Agios Nikolaos, Sitia, developed on the north side, which is more benign topographically.
Ierapetra is the only port on the south coast, on the shores of the Libyan sea, facing Africa. The island's fertile soil and towering peaks witnessed the development of one of the most important civilizations on Earth, the Minoan (2800-1150 B.C.). In successive phase, the Minoans built palace-states, the famous palatial centers of Knossos, Phaistos, Malia, Zakros (1700-1450 B.C.).

The painters and ceramics show us the limits the refinement of art can reach.
Their frescoes bring us close to the soul of that world, peace-loving, light-hearted, but also powerful. They bring us close to the sea and its wealth. A geological catastrophe, the eruption of the volcano of Santorini in 1450 B.C., halted the Minoan civilization at its height. But life did not cease. Though shipping, commerce and trade with other peoples, the Phoenicians, Syrians, Egyptians, new horizons opened up. With the invasion of the Archaians and the Dorians on the island the new cities of Lato and Aptera were founded.

Lato became the most important city on Crete (7th century B.C.). Then the Roman occupation set in (69-330 A.D.). The most distinguished center in those days was Gortyn. But Christianity came to the island early. During the Bysantine era the much coveted wealth of Crete was shown off in the mosaic floors of the basilicas and in half the churches of Greece. From the late 4th century until the mid-7th century, Crete was a prosperous and peaceful Byzantine province scattered with beautiful churches.


However, Slavic invasions (7th century) and the island's subsequent conquest by the Arabs (828) came to disturb this peace. The Arabs founded their capital at Iraklion wich they fortified and renamed (Handak). The town of Handak was used by the Arabs as a base for their pirate raids in the Mediterranean until 961 when the Byzantines managed to resume control of the island. Handak, which became a flourishing commercial port, continued to be the island's capital and to develop.

In 1204 Constantinople fell into the hands of crusaders and the Byzantine Empire was divided among them. In 1211 the Venetians settled on the island.
Through the centuries, the Venetians occupation which trigged numerous insurrections on the part of the peaceful coexistence between the two peoples, further marked by mutual influences. Arts and literature flourished, the Cretan Renaissance (16th-17th) transformed monasteries into spiritual and artistic centers which yielded religious icons and manuscripts that were channeled into the Orthodox East and Latin West. The towns became richer and more beautiful.

Faced up against the Ottoman threat, the Venetians fortified the large centers and the coasts, however, they did not manage to prevent the conquest oh Hania (1645) and subsequently that of Handak (1669).

The island ultimately became a territory of the Ottoman Empire. In the late 19th century the incessant rebellions of the Greek populace drove the Great Forces to buttress the Greek struggle for independence. Crete was declared autonomous in 1898 and was incorporated into the Greek State in 1913.